I have just been re-reading Diana McVeagh’s excellent biography of the composer Gerald Finzi (1901–56), remembered chiefly for his solo songs, clarinet concerto, the Christmas works Dies natalis and In terra pax, a small but valued amount of church music, and some well-loved part-songs including My spirit sang all day. His life before the Second World War was in some measure idyllic: he came of a wealthy background, and as a lover of the countryside was able to compose at leisure in a Wiltshire village (later 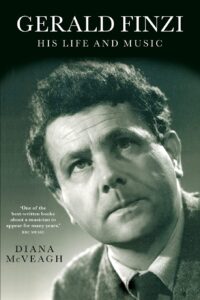 building his family home in rural Hampshire), with a circle of musical friends that included Ralph Vaughan Williams, Adrian Boult, and Howard Ferguson, among other noted composers and performers. As the clouds of war darkened, his letters and the journal kept by his wife Joy offer an illuminating picture of the dilemma faced by the musician in wartime: as it was put in a 1940 Daily Telegraph letter signed by leading figures in the arts: ‘artists are of more value to their country in their trained capacity, often in key positions, than serving generally with the fighting forces . . . Our art is a measure of our civilisation, and our artists its guardians’.

Finzi himself ignored this lofty assertion, choosing to spend the war working for the Ministry of War Transport in London (the alternative offered was a musical post at the BBC). His friends were variously employed, Howard Ferguson in the RAF as an ‘entertainer’, Adrian Boult (past military age) continuing to conduct the BBC Symphony Orchestra now evacuated to Bristol, Ralph Vaughan Williams (67 on the outbreak of war) at one point knocking on doors soliciting his neighbours’ pots, pans and iron railings to be melted down into fighter planes – a largely symbolic initiative promoted by Lord Beaverbrook, proprietor of the Daily Express.

A clear message that emerges from these experiences as documented by the Finzis is that, in one way or another, everyone’s life is affected by war. Another, perhaps surprising message is that the arts are resilient and do not disappear in wartime but, if anything, assume greater importance than in times of peace. In 1939, after an initial shock reaction to shut musical activity down – the Three Choirs Festival in Hereford at which Finzi’s Dies natalis was to be premiered was abruptly cancelled – concerts soon reappeared, among them the iconic National Gallery recitals organised by the pianist Myra Hess with help from Finzi’s friend Ferguson. Concert halls reopened, the Proms played on until bombed out from Queen’s Hall, while Finzi’s local Newbury String Players gave regular fund-raising concerts.

These testaments from the wartime years resonated strongly with me as I thought about music refusing to be extinguished in the Covid pandemic – remember those Zoom rehearsals? – and then I thought about music in the present Ukraine war; maybe you saw the news pictures of the Kiiv Opera defiantly taking to the stage again. I can’t lay claim to any such heroic spirit, but early in March I composed a brief choral setting of a Ukrainian prayer, for the simple reason that I was scheduled to lead a choral come-and-sing day in a London church shortly after the invasion and felt I could not face 300 singers without giving them some way of acknowledging in music the terrible events unfolding in Ukraine.

I could not have foreseen that a video recording made by the church of our rough-and-ready but heartfelt performance would be posted on social media and lead to a firestorm of online requests for the score, in response to which I made it available as a pdf free to any choir wanting it. So far we have sent out over 8,000 copies, requested by choirs or individuals in more than 80 countries. Many of these choirs have told me they are donating to Ukrainian humanitarian charities, so I know that some useful funds have been raised, and if this little piece of music has been a catalyst for their generosity, I am grateful. The whole episode has brought it home to me that musicians will instinctively reach out for a way of expressing through music their profoundest feelings about war and peace – I am old enough to remember the heart-wrenching performance of the Dvořák Cello Concerto given by Rostropovich at the 1967 Proms on the day of the Soviet invasion of Czechoslovakia. In this increasingly globalised age, anybody’s war is everybody’s war. What was it that John Donne wrote about no man being an island?

Order your free copy of A Ukrainian Prayer: 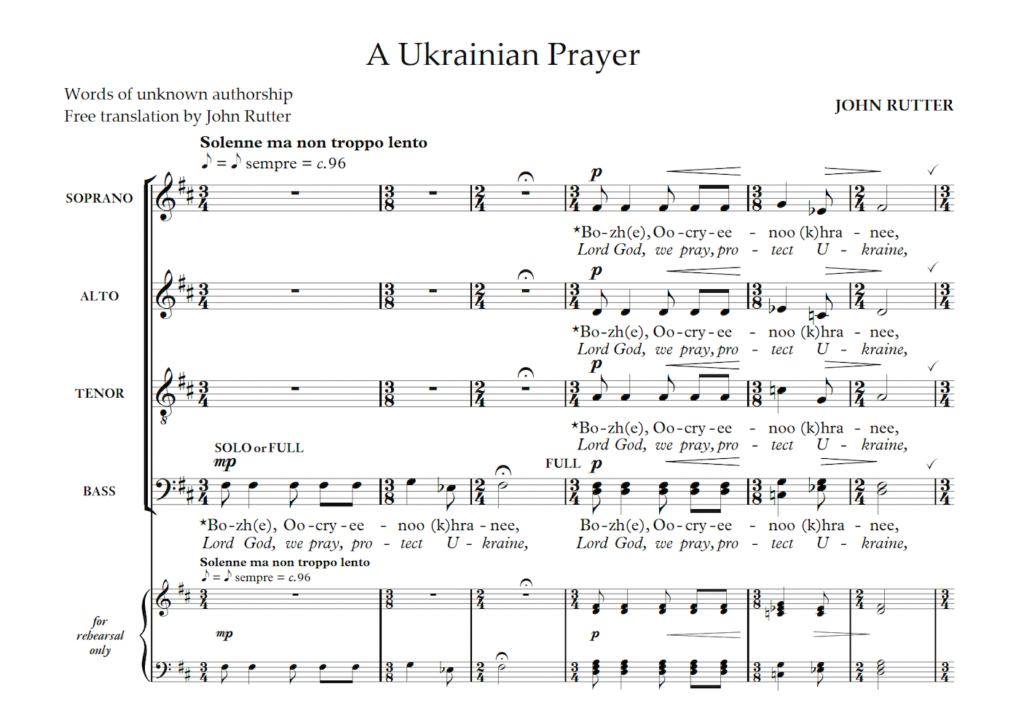 One Response to “War and Peace – but not by Tolstoy”