John Rutter: Anthems, Hymns and Gloria for Brass Band, recorded by Black Dyke Band and the Sheffield Philharmonic Chorus, is now at number 1 in the Official Specialist Classical Chart. After making a solid impression on its release on 24th September 2020 (coinciding with John Rutter’s birthday), the album has been propelled to the top in just three weeks after being featured as ‘Album of the Week’ on Classic FM. Black Dyke Band is one of the oldest and best-known brass bands in the world, and also lies claim to being the most recorded band in the world with over 360 recordings (a number that increases every year). 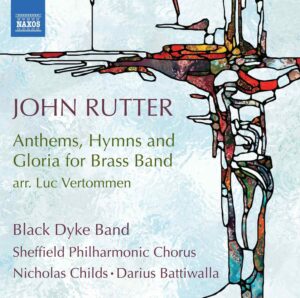 This album features some choral favourites arranged for brass band, including the Gloria, Pie Jesu from the Requiem, and This is the Day, composed for the wedding of HRH Prince William and Kate Middleton in 2011.

Listen now or order the CD >>

“Arranging the choral works of John Rutter for brass band is one of those decisions that seem so obvious in retrospect that one wonders why no one thought to do it earlier.” (AllMusic)

“The highlight is the Gloria … It is difficult not to be uplifted by the sheer spirit and joie-de-vivre of what endures as one of Rutter’s most-loved and enduring creations.” (Brass Band World)

Listen now or order the CD >>