Last week I had the pleasure of leading a singing day in the idyllic surroundings of Dorchester Abbey, set in a tranquil Thames Valley village. It’s a favourite location for filming well-mannered English murder mysteries: Miss Marple, Inspector 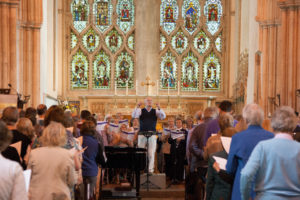 Morse, and Barnaby (of Midsomer Murders) have all visited there. No surprise, then, that the enterprising Em Marshall-Luck has chosen Dorchester as the setting for her ambitious and now well-established English Music Festival, though no murders are anticipated. It runs from 24th to the 27th May, and if you fancy a total-immersion English experience, do go. The following weekend you can go on to the Worcester-based Elgar Festival (30th May to 2nd June).

But in case you attend them both and then feel tempted to start singing Flanders and Swann’s (satirically intended) The English, the English, the English are best, hang on a minute. Yesterday I was among the congregation gathered in the chapel of my alma mater Clare College Cambridge for an annual reunion Evensong where over 100 past members of the chapel choir joined forces with the present choir to raise the roof in song. The introit was the much-loved Faire is the heaven (1925) by the quintessentially English organist-composer William Harris. Except, if you didn’t know who the composer was, you would think it was Richard Strauss, whose similarly richly-voiced and Romantic Deutsche Motette was written eight years earlier. Time for the Magnificat, and Brahms’s Second Symphony (1877) started up from the organ loft. Well no, it was actually Stanford in A (1880), but, to put it politely, they are very close cousins. The anthem was my own Hymn to the Creator of Light (1992) . . . my music is doubtless a ragbag of influences, only some of them English, and this particular piece culminates in a treatment of the old German chorale Schmücke dich. 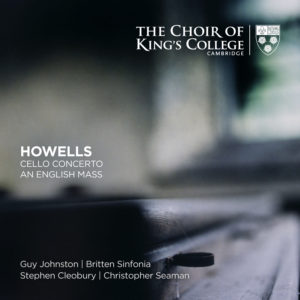 On to dinner, and then when I got home I listened to an excellent new recording by the choir of King’s College Cambridge: a double CD of music by Herbert Howells (1892–1983), his Collegium Regale canticles, the rarely performed An English Mass (1954), the newly restored Cello Concerto, and three organ pieces masterfully played by Stephen Cleobury, shortly to retire after thirty-five years as Organist and Director of Music at King’s. Herbert Howells is a composer whose music you either love or find that it goes straight past you (I love it), but as I listened to the new recording I couldn’t help reflecting that An English Mass is a massive misnomer as far the style of the music goes: the predominant influence in Howells’s music was always the French impressionist composers, his particular hero Debussy. Howells is the composer often thought of the one who gave the Anglican church its musical voice in the second half of the twentieth century—but he spoke with a strong French accent.

So, what of Elgar—whom Howells revered, and met on several occasions, and whose birthday is being celebrated at the festival that bears his name? Unlike the better-off Stanford and Parry, who both studied composition in Germany, Elgar could not afford that luxury and was largely self-taught. But in his father’s music shop

he was able to study the published music of composers from all over Europe—Brahms, Wagner, Strauss, Berlioz, Meyerbeer, Dvořák and many others—and their influence is to be heard everywhere in his music, though thoroughly absorbed into the personal language we think of as Elgarian. Studying a composer’s manuscripts always draws you closer to that composer, and I felt close to Elgar as I recently pored over the manuscript of The spirit of the Lord — the awe-inspiring prologue to his oratorio The Apostles (included in Sacred Choruses, published by OUP) — but I felt almost as close to Wagner, without whose leitmotiv technique and whole idiom Elgar’s music in his oratorios could not have been as it was. Elgar was the most thoroughly European of the English composers of his generation. Those who came after him, such as Vaughan Williams, may have professed a more specifically English allegiance, but Vaughan Williams, remember, studied at different times with Max Bruch and Ravel (was there ever a more French-sounding English song cycle than On Wenlock Edge?), and was inspired by Bartók and Kodály’s folk-song researches in Hungary to embark on his own quest for English folk-songs.

Most music, including English, has always been of mongrel parentage, and is all the better for it. Cross-fertilization, an altogether natural and healthy process that has been going on for centuries, is not to be stigmatized as ‘cultural appropriation’. Whatever may happen to Britain politically in the coming days, culturally we must never pull up the drawbridge and close down the shutters or we will be infinitely the poorer for it.

3 Responses to “No Composer is an Island”

WordPress Image Lightbox
We use cookies to ensure that we give you the best experience on our website. If you continue to use this site we will assume that you are happy with it.OkPrivacy policy